“An AI robot society that makes people happy would be a sensible society.”

Said Mr. Shintaro, a junior at university. When asked what a utopian AI robot society should be like, he answered this way:

“Now, we can read eBooks, but I still prefer conventional books. In the same way, some people appreciate the things that AI can do and some think nothing beats humans. However, dividing activities and tasks into what humans can do best and  which tasks should be performed by AI is desirable.”

Generation Z, also known as digital natives, are coming into close contact with AI and taking advantage of the benefits it offers. So how would Mr. Shintaro, as a member of this generation, interact with AI? And what will the Ai robot society be like in 30 years? We conducted an interview with him to find out.

“I get annoyed when dating App commercials pop up, haha”

When asked about his impression of AI, the 20-year-old gave a wry smile, saying that recently he had mixed feelings towards videos and commercial messages that popped up on YouTube.

“Sometimes I’m pleasantly surprised when something that I’m looking for pops up. But at the same time, I wonder whether there is a better way of arranging this advertising because the proportion of irrelevant commercials on my feed remains high.”

As a student in the law department and president of a Chinese study group, Shintaro likes to learn languages and also often watches language-related videos.

“Because I lived in Hong Kong, I find the Hong Kong English accent is something pretty unique. Now in Japan, the popular ‘Daijiro’s video’ often appears as a recommendation for me. Probably AI judged it to be appealing to me as it is connected to regional accents of English.”

But on the other hand, he also emphasizes that frequently, the videos that are presented to him as a result of AI algorithms that are not always related to his needs.

“During classes in which I have to check legal texts, I often search for legal terminology.  Then advertisements appear such as “would you like to take the bar examination?  Also, advertisements for revision services.”

“Do you think these kinds of adverts are helpful?” I asked.

Will the need for learning languages become unnecessary due to AI?

In 2020, the National Center Test for University Admissions, a type of university entrance examination in Japan, which had been criticized for failing to test students’ abilities in English writing and speaking, was replaced. The government introduced a new system called the Kyōtsū Test, in which students take non-governmental examinations such as TOEFL and IELTS to assess their proficiency in English instead of taking a test prepared by the National Center. However, the Ministry of Education, Culture, Sports, Science and Technology (MEXT) withdrew plans for asking private sectors for help because of concerns related to a lack of standardization which could result in regional discrepancies.

I then made the observation that language learning has been a huge problem for many people. If AI could replace multilingual translation in the future…

”I didn’t expect you to answer so immediately without any hesitation.”  I said half jokingly. As a person who loves learning foreigning languages myself, I have always been hesitant about expressing my opinion on this issue. I have found it impossible for me to approach the question with an open mind, because I worry about AI taking my hobby away in the future.

However, Mr. Shintaro looked back on his experience of learning languages and said, “We can learn people’s culture as well as their language. We can gain an understanding of the Chinese 面子(mianzi or face) culture whilst learning the Chinese language. For example, the phrase  多喝熱水(‘Have some warm water’ has a literal meaning, but also can refer to a situation in which you can only give your girlfriend/boyfriend simple advice instead of solving a problem for them). Even though you can translate the sentence using AI, you can’t use it effectively without a deeper understanding of its different meanings depending on the context.”

Mr. Shintaro agrees with using multi-language translation as a tool to gain an overall idea of the content of a text but criticizes using this technology in situations which  involve interacting with others.

“If a person learning Chinese uses translation from beginning to end, does he really want to go to China? Through learning a language, you develop an interest in going to China itself. I don’t think it’s right to rely on  AI to translate everything just because you find it difficult learning a new language.”

Will the popularization of multi-language translation really help to improve interaction across national borders?  It’s a thought-provoking question. 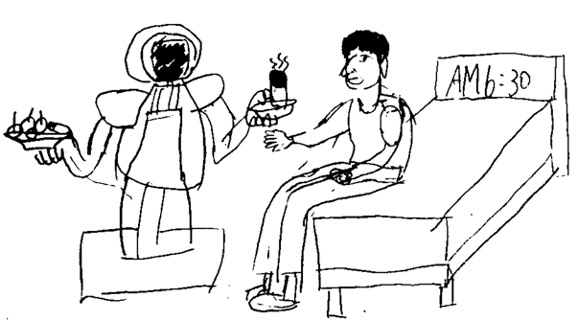 When we asked him about the future of AI, he initially said he would like something like the Doraemon robot, but eventually he sent me a picture of ‘コロ助(korosuke).’

He thinks because AI might make mistakes in the same way as humans, it would be more desirable to have a robot with the capacity to act “dumb”.

At the end of the interview, I asked him how the utopian AI robot society would be for human beings.

After a silence of a few minutes, he answered  “a sensible society.”

“Regardless of our stance, we cannot stop its proceedings, so it is important to develop one’s own philosophy – is it OK to assign a task to AI or should it be done by humans? Personally, when I’m learning Chinese, I don’t want to rely on AI.”

He sees a society where some people actively  want to use AI but those who don’t want to use it that much are not left behind. Let’s look forward to a flexible 2050!